Although Life Flashes By was a project I largely undertook on my own, I did, as they say, get by with a little help from my friends. As such, I figured I’d do a series of short interviews with people who played some kind of key role in helping this game become what it is. This time, I’m featuring Jon “Space Cowboy” Rosenbaum, who did the voices of Aaron (Charlotte’s ex-husband) and Graham (Charlotte’s late father). 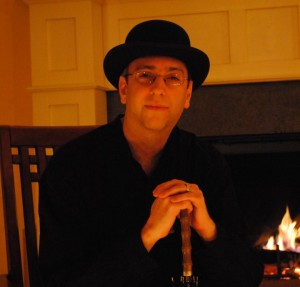 Tell me a little about your acting background.

I voiced some cameo roles in the English adaptation of the anime series, Gravitation.

What were your main influences in developing the voices of Aaron and Graham?

Aaron isn’t too far off from my normal speaking voice. He actually came out of the Trevin audition, where I used a deep-voiced sarcastic Cheshire Cat as a possible interpretation. After hearing from you that the soft deep voice would work well for Aaron, the musician part came easy since I already am one. As for Graham, I could probably trace his influence back to one of the Britcoms I’ve watched sometime in the past. Being an Anglophile, I thought it would be really fun to give Graham a go.

What (if anything) do you find most compelling about video game acting, as opposed to acting in more traditional media?

I couldn’t speak to traditional acting, though I do act like a rock star when my band plays out. I can say, however, that I find video game acting to be very creative because of trying to convey an attitude or emotion within a conversation without having any visual reference or any immediate feedback from the actor with whom I’m sharing the scene. It’s also something especially meaningful to me since I am quite an avid gamer.

I met you through the fantastic anti-oppression blog Shakesville. How did you get involved with the site, and what inspired you to do so?

I think this intro post sums up fairly well how I arrived at Shakesville.

What kinds of voice acting projects do you hope to be involved with in the future?

I think that video games and animation are the two areas that I particularly enjoy, and would love to do more of each in the future.