Although Life Flashes By was a project I largely undertook on my own, I did, as they say, get by with a little help from my friends. As such, I figured I’d do a series of short interviews with people who played some kind of key role in helping this game become what it is. First up is Eric “ComradeNarf” Stembridge, who played the voice of Trevin. 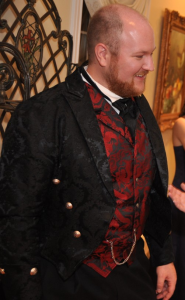 Tell me about your acting background.

I started acting in Jr. High for the fun of it, and by the time I entered high school I enjoyed it enough that I started joining the teams entering state-wide competition. In college I worked towards a Minor in Theater; I performed in several shows and one-act plays, as well as taking the reigns as director for a show. I paired my love of theater with my love of animation and began creating (and voicing) my own cartoons to use for presentations instead of PowerPoint. Towards the end of college I wound up stumbling across Synthetic Interactive (now the very impressive Sticky Studios) who were working on the demo for “Project Joe.” I was accepted for the team to do voice acting, which was much, much, much harder than I realized. Voicing my own cartoons was easy, I knew exactly what was going on and could listen to my other recordings for reference. With Project Joe, my closest voice actor was in Tennessee (I’m in Utah) and we were typically recording our dialogue at the same time. It was a crash-course in anticipating the delivery of others. Unfortunately we weren’t able to secure funding to finish the game – which I find very troubling as the lines I perform in the game were rubbish due to inexperience. I’d worked with the team for several years, and felt by that point I could do a much better job with my delivery. Hopefully I’ll get the chance to help finish that work someday… In the meantime, I still animate and provide voices for my animations.

What were your biggest influences when it came to developing Trevin’s voice?

I think the two biggest influences for Trevin’s voice were the voices of Max from Sam & Max, and Yakko Warner from Animaniacs. I tried to mix in a bit of New York accent to get that bit of Nathan Lane that Deirdra originally envisioned, but I don’t think it was a terribly prominent part of the voice.

What were your favourite parts of Life Flashes By to record?

I’d say my favorite parts to record were Trevin’s comments about the bizarre set pieces. The lawn gnome, the castle set piece at the bookstore, and the model of the conference room were some of the best. My all-time favorite had to be the comment about the sofa in Charlotte and Aaron’s place. “Not the hungriest piece of furniture I’ve ever seen, but it certainly ranks in the top eight.” I don’t even know how many takes that line took; I constantly busted up laughing trying to record it. I couldn’t help but think of which couches and their actions held the number 1-7 spots.

What kind of voice work haven’t you done yet, but would like to?

I really want to do some villain voice work. When I was doing stage plays, I wound up as an antagonist most of the time, and I had an absolute blast. I want to do some melodramatic cartoon villain voices – lots of maniacal laughter, boasts and threats, and perhaps a really cool accent. The type that really rollick in their own badness. Also, any character that uses comments like “Great Grandma’s granola,” “Confound it all,” and “Excelsior!” are a must.

What are your future creative plans?

Currently I’m finishing up a script for a radio play. The idea is absolutely preposterous: it follows a crew of appliance delivery people in a post-apocalyptic world. I know, I know, it makes absolutely no sense, but that’s half the fun. I’m also working on animating a twenty to thirty minute cartoon in which I voice a retired super villain. I wrote the script about seven years ago, so it’ll be nice to see it finally completed. The site hosting it won’t be ready until this summer; but it’ll be hosted at Redundant Industries – www.redundancydotnet.net.