Ack, it’s December! In other words, it’s nearly the end of the year, and Dominique Pamplemousse still isn’t done yet. But it’s getting there!

So, here’s the thing. I’m now doing contract work in an addition to being an indie developer. I’m contributing content to a really cool interactive narrative project that I hope to talk more about in the future, when I’m allowed to. But suffice to say, it’s an excellent opportunity and I’m super excited to be working on it. I’m also trying to get some new things lined up for next year, which I’m also looking forward to. The downside, of course, is that these things have all been taking up more of my time, which I was initially focussing on Pamplemousse. Not all of my time, mind you. But definitely some. So it’s taking a little bit slower than I initially thought.

I have definitely made progress, though, and I promise you all that this game will get done in a reasonable time frame, if only because I really, really don’t like leaving things unfinished for years. So, here’s a slightly more detailed progress update:

Script: All done! Everything is written, barring any one-line edits I decide to make in the process of building the rest of the game. Even the endings! (Yes, in plural.) It’s always cathartic to write endings.

Art: Also all done! Characters have been animated, sets have been designed and captured, and everything’s looking all fantastic and classic movie-like! Hooray!

Audio: I’ve recorded about 2/3 of the music and spoken dialogue so far. I’ve also been working on adding a little bit more variety in the music loops so that they sound less repetitive and samey, which seemed to be a common complaint when people played the demo. See, I do sometimes listen to feedback!

Code: I’m about 1/3 done hooking everything up so it plays. Once that’s done, I expect to spend quite a bit more time testing (and sending early betas to the early beta access contributors) and optimising, and then submitting to places like the App Store, the latter of which is a first for me. Fingers crossed that the process doesn’t turn out to be too arduous.

And that’s where things are, game-wise! Meanwhile, I’ve also been filling out cards to send in the mail, and aiming to get all physical rewards out to my Indiegogo contributors this month. Here’s what the cards look like printed, if you’re curious: 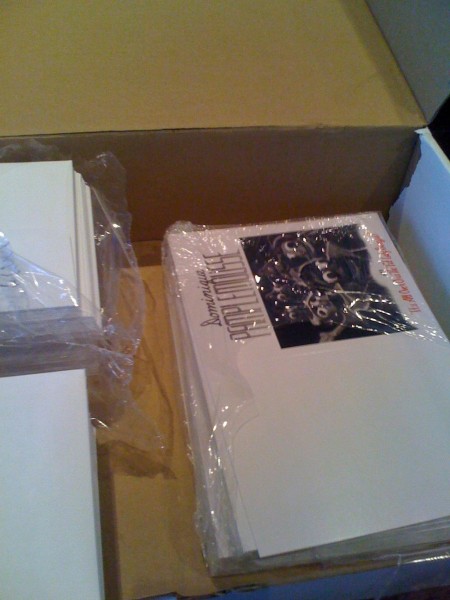 And that’s all the news that’s fit to Pamplemousse for this month! Here’s hoping that by next month, there’ll be more good news to report!

This entry was posted in Blog Posts and tagged pamplemousse. Bookmark the permalink.